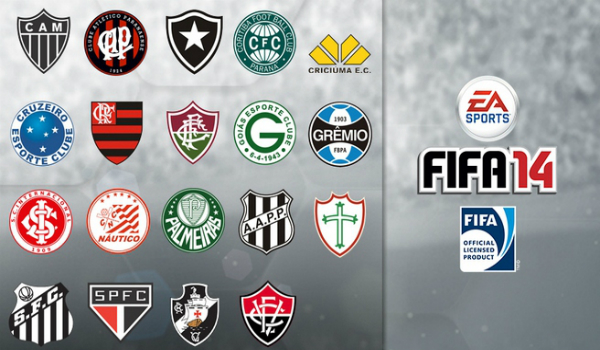 With 19 officially licensed Brazilian clubs announced for FIFA 14 and more license announcements expected in the coming weeks, we examine EA Sports’ historical choices for additional licenses and contrast them with the most vocal requests from the community this year.

There have been rumours for some time now that EA Sports are looking to strengthen their relationship with football clubs/establishments in Latin America for future FIFA titles. It is no secret that the FIFA franchise does not enjoy the same level of commercial success in Latin America and Asia as it does in Europe or North America. This is partly due to EA Sports’ focus on western football and broadcast culture as well as a lack of licenses and offerings to appease the football gaming fans in these regions. FIFA’s arch-rival (and only competitor), Pro Evolution Soccer, has enjoyed steady domination of these “alternative” gaming markets for over a decade. South America is not a new football market, but it is a growing gaming market in the eyes of the major games publishers.

Historically, parts of Asia, South America and Africa have been rampant with piracy which led publishers to focus their efforts/budgets on Europe and North America. The western markets provided the commercial revenue needed to keep their businesses viable. In similar fashion, EA Sports has always attempted to create a global football game, but catered to the dominant European football market. The European leagues are home to the biggest names in the sport and the global TV audiences justify EA’s focus on these leagues when attempting to create the best football game possible. However, with the football gaming community becoming increasingly more vocal in recent years fans are clearly more expectant. Additionally, as budgets for major gaming franchises grow with every generation, so does the competition. In the football gaming market this would mean competition for licenses and exclusivity.

In 2011, EA Sports included Arabic language localisation with in-game text menu’s and audio commentary in a football game for the first time. It was an experiment that was extremely successful in both bringing the FIFA brand commercial success and community appeal. To follow it up, they added the Saudi Arabian league to the game the following year. During the same time-frame, EA’s competitor has splashed the cash capturing some exclusive licenses to major global football tournaments/leagues including the UEFA Champions league/Europa League, Copa Libertadores and Brazilian league license.

There is a clear distinction in the requirements of football gaming fans from various regions of the globe, a fact that is evident by visiting major community sites. All fans dream of an improved gameplay experience, but beyond that fans differ in their prioritisation of the following factors; licenses, game modes, online features or customisation options.

Our focus in this article is licenses, and amongst the community this season there have been some vocal shouts for leagues ranging from Hong Kong to Ukraine and UAE to Argentina. Another frequently requested license is that of the UEFA Champions League, however, we must reassure the fans that the competitor has an exclusive on that one!

Here at Team FSB we believe the Argentinian and Ukrainian leagues deserve some showtime in FIFA. We want to know what leagues you believe should be in FIFA. Let us know your thoughts in the comments section. Let your voice be heard!